Storms in Portugal are not as frequent as in other countries due to its milder climate and its proximity to the Atlantic Ocean. However, over the centuries of its existence, several occurrences of storms or atmospheric disturbances have been recorded.

Unlike many other European countries, Portugal does not have a climate record, often preventing the climatic reconstructions of certain periods in history. 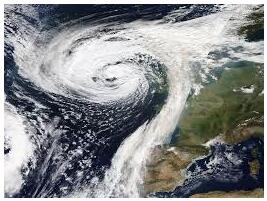 This was the most recent storm to hit Portugal. This particularly affected the regions north of Lisbon. The storm was characterized by strong winds and swell, as well as a large amount of precipitation that led to some flooding across the country. Financial losses were high with the destruction of homes, crops and businesses.

This storm arises from ecclesiastical records, allowing this occurrence to reach our days. According to these records, it is known that the storm hit the regions of Coimbra, Porto, Santarém, Lisbon, Évora and Montemor-o-Novo, as well as Cuba.

This storm hit the worst conditions over the weekend with strong gusts of wind and heavy precipitation in particular in the form of hail. The atmospheric depression would have formed in the Azores archipelago and directed towards the continental portion of the country. The damage could be more intense due to the occurrence of storm Emma that preceded it.

Storm Emma, ​​which occurred a week before Storm Felix, brought heavy damage due to heavy rains that lasted about a month, as well as strong winds . These conditions caused extensive damage to properties and businesses (mainly agricultural ).

Storm that formed in the Azores archipelago, it hit the country with strong winds and heavy rain , particularly along the coastline. The most affected area was the North of the country, despite having spread to regions further south, bringing floods and falling trees.

This storm devastated not only Portugal, but also the rest of the Iberian Peninsula, with considerably strong winds and very high seas, leading Portuguese civil protection to issue a red alert for the entirety of its coast. After reaching the Iberian Peninsula it headed towards the Mediterranean reaching Italy.

A cyclone that started in the middle of the Atlantic Ocean caused a strong storm in Portugal, with strong winds . The damage caused resulted in the fall of trees, the cut of electricity, as well as the cutting of telephone lines, leaving more than a million people without electricity .

The storm formed in the Atlantic Ocean and immediately hit the city of Lisbon, with extremely strong winds that caused serious damage and spread throughout the country, later moving to Spain, becoming known as the Iberian storm.

Extremely destructive storm , having affected both the mainland and Madeira Island , however, despite the storm’s aggressiveness, it is believed that this was not a tropical system.

This catastrophe severely affected Portugal, having remained in the collective memory of the Portuguese for a long time. This storm has been described by many as similar to a war, having inspired the creation of two poems.

Cold frontal surface that left Portugal on orange alert due to its severity, that is, strong winds , a lot of precipitation and marine agitation. This storm became one of the most violent to hit the country. Before its occurrence, the storm Ana had already wreaked havoc.

Storm that formed in the middle of the Atlantic and was characterized by the meteorological services of the United States of America as a category 2 tornado . This one caused serious damage in the island of Madeira, from destruction of housing, to falling trees and flooding .

Storm crossed the Azores archipelago leaving a trail of destruction in its path, from a large amount of precipitation to extremely strong winds capable of uprooting trees.

Storm , at the time called by twelve, arrived in the Iberian Peninsula, leaving great damage in both Portugal and Spain. This storm was characterized by intense winds that caused destruction wherever it passed.

Considered the first major hurricane to hit Portugal. This one was formed on the island of Madeira and headed for the mainland, and its effects were felt particularly in the south of the country, however, it did not show high aggressiveness, since no damage was recorded.

This storm led to the issuance of a red warning for the Azores archipelago, in particular for the islands of Corvo and Flores. The main effects of this storm were heavy rains that affected the western part of the archipelago.

This hurricane brought to the Iberian Peninsula a large amount of precipitation , particularly in the city of Porto , causing numerous floods throughout the city.

Hurricane Charley was a storm that ravaged the Azores causing extensive damage at the base of Lajes, as it produced extremely strong winds , and no other form of weather caused by the hurricane was reported.

This storm headed towards the Azores archipelago causing strong winds , high precipitation , as well as sea turmoil. Due to its approach, several storm warnings were issued for the various islands of the archipelago. Due to the danger caused by the storm, some schools were closed and flights were cancelled.

This storm crossed the Atlantic leaving a trail of destruction in its wake. Upon reaching Portugal, Hurricane Joaquim had already lost part of its strength, however, for five days it moved along the coast of Portugal, causing changes in the climate , eventually being absorbed by another frontal system.