It is called the Andean states the region of South America cut in the Andes, a mountain range that stretches from north to south on the west coast of South America. Venezuela, Colombia, Ecuador, Peru, Bolivia and Chile are cut countries the Andes Mountains, which make up Andean America.

In Andean America there are three landscapes with different climates and vegetation: The Andes Mountains; the coastal plains (on the shores of the Pacific Ocean) and the eastern plains (Amazonian lowlands). The climate varies according to the distance from the Cordillera: it can be tropical, desert, equatorial, Mediterranean or temperate.

The inhabitants of Andean America are predominantly mestizo, with Spanish and indigenous descent, although Ecuador and Peru are exceptions, since in these countries the majority are indigenous. The official language in the Andean countries is Spanish, and the predominant religion is Catholic, which according to Silva (2006, p. 72), “reflects Spanish colonization”.

Most of the population is concentrated on the plateaus around the Andes or on the coastal plains, predominantly in urban areas, which worsens the living conditions of a large part of the population of these countries, which are considered underdeveloped.

The economy of the Andean countries is based on primary activities, such as: mining, fishing, agriculture and livestock. In relation to mining, the main resources found are: Petroleum (Ecuador, Colombia and especially in Venezuela); lead and silver (Peru); copper (Chile); tin, bauxite and gas (Bolivia). Fishing is highlighted in Ecuador, Colombia and mainly in Peru. Family, or subsistence, agriculture is practiced among the poorest peasants, who plant with few resources. In contrast to subsistence agriculture, commercial agriculture uses modern techniques, and focuses on large properties whose products are export-oriented. Livestock, both of cattle and sheep, is of low productivity, and does not reach the domestic market (SILVA, 2006, p. 72).

Latin America is made up of countries that have a neo-Latin language, that is, French, Portuguese and Spanish.

With more than 42 million square kilometers, the American continent is the second largest on the planet. Its population is approximately 925.2 million inhabitants, who are distributed in 35 countries and in several territories that do not have full political autonomy, such as, for example, French Guiana.

The most common division of this large continental portion is based on the geographical position of American lands on the globe: North America, Central America and South America. However, the American continent can also be divided into Anglo-Saxon and Latin America, being established through language and historical and cultural elements.

The colonization process in the American continent was promoted by the Europeans, with emphasis on the Spanish, Portuguese, British, Dutch and French, and one of the main inheritances of this process is the language. In this sense, the nations colonized by countries whose linguistic trunk is Germanic (English), belong to Anglo-Saxon America. Latin America, on the other hand, is made up of countries that have a neo-Latin language (French, Portuguese and Spanish).

However, despite being former colonies of German-speaking countries (English and Dutch), Suriname, Jamaica, Trinidad and Tobago, among others, are considered countries in Latin America, as they have similar historical and cultural characteristics to those of Latin Americans. Americans.

Another important element for this division refers to the geopolitical and socioeconomic aspects, since Canada and the United States are the only superpowers on the continent, strengthening this unification in Anglo-Saxon America. Latin American nations, on the other hand, are in the process of economic development and most of them have several social problems. 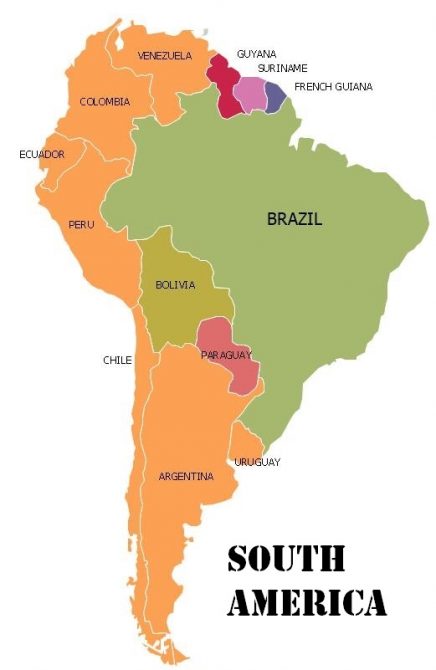