Kosovo. According to CountryAAH, the total population in Kosovo is 1.8 million people in 2020. Kosovo was shaken in March by the worst outbreak of violence since the United Nations took over the administration of the province following the NATO bombing five years earlier. The unrest was triggered by reports that three Kosovo Albanian boys would have drowned in a river after being chased by Serbian youth in the divided city of Mitrovica. This led to angry Albanians attacking Serbs in several parts of the province. Nineteen people were killed during two days of violence and nearly 1,000 people were injured. In addition, hundreds of Serbian houses and Serbian Orthodox churches are on fire. The unrest also spread to Serbia, where protesters tried to set fire to mosques in revenge against the Muslim Albanians in Kosovo.

In an investigation afterwards, the UN ruled that there was no evidence of history that triggered the violence. The European security organization OSCE accused local media of whipping up the mood with emotionally charged and poorly substantiated reporting. According to abbreviationfinder, KS stands for Kosovo in text.

In October, parliamentary elections were held, the second since the UN entered the province’s administration. The election was almost boycotted by the Serbian minority, in protest against the lack of security and against the Albanians’ quest for independence for Kosovo. President Ibrahim Rugova’s party Kosovo’s Democratic Alliance (LDK) retained its position as the largest party and formed a new, narrower government coalition with the Alliance for Kosovo’s Future (AAK), a party formed from the disbanded guerrilla UCK and came in third place. Kosovo’s Democratic Party (PDK), which was a member of the outgoing government, joined the opposition. Rugova retained the post of President and as new Prime Minister AAK leader Ramush Haradinaj was appointed. The election of head of government attracted criticism from representatives of the international community. The reason was that Haradinaj, who was a commander of the UCK during the war, was interrogated on a couple of occasions by investigators from the UN Criminal Tribunal for the former Yugoslavia. Many believed that the tribunal planned to prosecute Haradinaj for war crimes.

During the year, Finnish Harri Holkeri resigned as head of the UN administration in Kosovo, UNMIK. Holkeri was replaced by the Danish Søren Jessen-Petersen, who towards the end of the year clearly emphasized that Kosovo’s new government must take measures to protect the rights of the population minorities. Otherwise, UNMIK will impose sanctions, it was called. Jessen-Petersen also confirmed that negotiations on the final status of the Serbian province would begin in 2005. 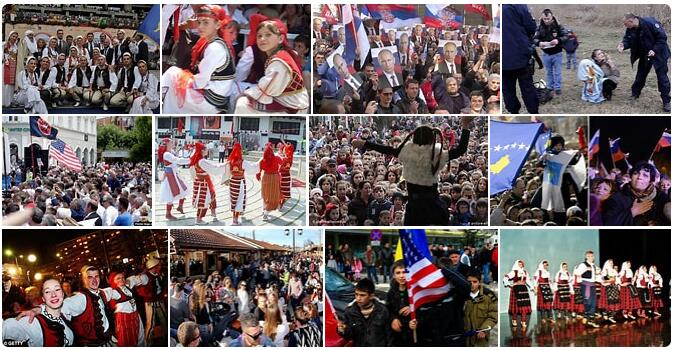 In 1996, according to one estimate, the population of Kosovo was 2,151,000. The war, which has affected Kosovo since March 1998, has resulted in a massive exodus of its residents: according to the UN High Commissioner for Refugees, between 1998 and mid-April 1999 they abandoned their place of origin approximately 630,000 Kosovars, of which 310,000 have found refuge in Albania (190,000 had already moved there before the outbreak of the war), 119,400 in Macedonia (16,000 since before March 24, 1999), 61,000 in Montenegro (25,000 since before March 24, 1999). The data from the High Commissioner do not include Kosovars forced to leave their homes and who have found hospitality with relatives and friends, or who have moved only temporarily to escape the violence of the Serbian paramilitaries. Subsequently, the situation worsened and, according to data from the International Red Cross, there were approximately 969,000 refugees from Kosovo on 1 May 1999. The international community immediately mobilized in favor of Kosovar refugees and displaced persons and, following the acceptance by Belgrade of a peace plan, has given every possible help to facilitate the return to normality in the country. As a result of this, therefore, many refugees have returned to their places of origin, but it is still difficult to give a precise assessment of the demographic consistency of the region.

Few centers have an urban character: besides the capital, the only real city, Prizren, Peć, Mitrovica.