The geography of India is characterized by great diversity. High mountains and flat plains, forests and barren areas as well as fertile river plains and deltas alternate. The natural border in the north and northeast forms the Himalayas, the highest mountain range in the world, which is separated from the Karakoram in the extreme northwest by the high valley of the Indus. South of the Himalayas are the wide, fertile river plains of the Ganges and the Brahmaputra. Northeast India, including the Brahmaputra plain, is only connected by a narrow corridor between Bangladesh and Nepal or Bhutan with the rest of the country. The northeast region is made up of the Patkai or Purvachal Mountains, which are up to 3,800 meters high shielded from Myanmar and the almost 2,000 meter high Khasi Mountains from Bangladesh.

The highlands of Dekkan occupy most of the Indian peninsula, which juts out into the Indian Ocean. The Vindhya and Satpura mountains shield the Deccan from the Ganges plain in the north. In the west it is bordered by the Western Ghats, which are up to 2,700 meters high, and in the east by the flatter Eastern Ghats. Both mountain ranges meet in the south, where the peninsula tapers to Cape Komorin. The Western Ghats drop steeply to the Konkan and Malabar coasts along the Arabian Sea. The Eastern Ghats merge into the wider eastern coastal plains on the Bay of Bengal.

India has both a subtropical continental climate (especially in northern and central India) and a tropical climate (in the south and in the coastal areas). While the temperatures in the north fall below 5 degrees in January and can increase to over 45 degrees in May, it is warm to hot all year round in the south of the country.

Flora and fauna also benefit from the different climates and the diversity of natural landscapes. The diverse vegetation is home to a multitude of elephants, monkeys, (Bengali) tigers, camels or snakes, more than 1,200 native bird species, etc. India is also home to a huge number of cattle. But people, in their hunger for land, penetrate more and more into the habitat of the plants and animals and push them into ever smaller retreat areas. 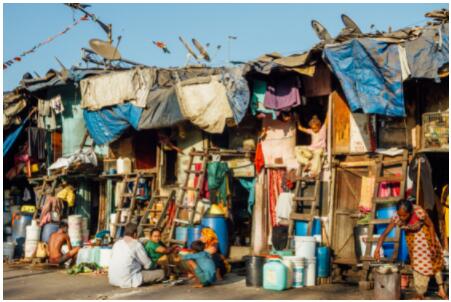 Industrialization, population growth and increasing urbanization / metropolitanization are important factors in a number of serious environmental problems, such as air pollution, inadequate waste disposal, forest decline, the spread of deserts and, most seriously, water shortages. Although environmental protection, including the protection of forest areas and their residents, was anchored in the Indian constitution as a goal as early as 1976, the existing environmental laws are not consistently implemented and monitored.

Water has become a scarce commodity, as India only has 4% of the world’s water resources, but is home to around 18% of the world’s population and groundwater reserves are threatened by the irrigation of agricultural land and private and industrial water requirements. Millions of Indians are already feeling the water shortage. There is an increasing number of internal Indian disputes over water.

The country’s environmental policy has to face the dual task of “curbing industrial pollution”, especially in the country’s cities, and “sustainable management of natural resources”. The country is supported by GIZ, among others.

Besides the home-made problems, India is one of the countries that will be severely affected by climate change. An increase in temperatures and sea levels is expected, which will particularly affect the coastal regions. It is also expected that there will be more irregularities in the monsoons, which will result in serious crop failures. The prognosis that floods and other natural disasters (such as earthquakes or storms) will increase shows the great dangers to be expected for the country and its people.

The national flag consists of three horizontal stripes of different colors: the top stripe is saffron, the middle stripe white and the bottom green. In the center is a navy blue wheel with 24 spokes. It is considered the “wheel of law” (Sanskrit: dharmacakra) and is understood as a symbol of the ancient culture of India. The national coat of arms, like the dharmacakra, is taken from the capital of a column of the ancient Indian ruler Ashoka (272-232 BC). It is located in the museum of Sarnath, the place of the first discourse of the Buddha, very close to Varanasi / Benares.